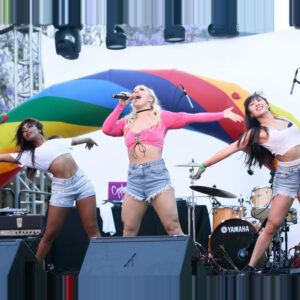 Hailing from Canada but currently based in Los Angeles, Maggie Szabo has been extremely busy releasing a series of high-profile singles, remixes and EPs that have put her on the map as a 2021 artist to watch. The audio of her recent single, “Worth The Weight” was exclusively premiered by Rolling Stone India and the music video by CelebMix. Maggie has also been making waves on prominent Spotify playlists including New Music Friday Canada, Fresh Dance Pop, Gym Workout Motivation, New Music Friday Switzerland, New Music Friday Deutschland and many more.

This pop-songstress has quickly become one of the most sought after songwriter/vocalists for DJs and notable film and TV placements for networks like E!, Disney, NBC, Netflix. Notable press includes Rolling Stone India, CelebMix, The Advocate, Billboard, Popdust, Huffington Post, Ryan Seacrest, Perez Hilton, EARMILK and many more.

By working with organizations such as the Trans Chorus of Los Angeles, Maggie uses her music and online presence to conquer social injustice. Her power ballad, ‘Don’t Give Up’, is a beautifully authentic and heartfelt song dedicated to transgender youth around the world who live in fear and suffer from rejection and exclusion. It was premiered by Billboard and praised by media outlets such as PopDust and Huffington Post. Proceeds from the song are donated to empowering homeless LGBTQ+ youth.